skip to main | skip to sidebar

......Well, the Landmine Marathon "East of Arizona" tour was a success and we played some amazing shows with the likes of Misery Index, Book of Black Earth, Wizardry, Lone Wolf and Cub, Mutant Supremacy and even the likes of Lamb of God and Children of Bodom! haha. Lamb of God even actually watched us and talked to us. Weird. Here's a photo of yours truly rocking at the New England Metal and Hardcore Fest in Worcester, MA. 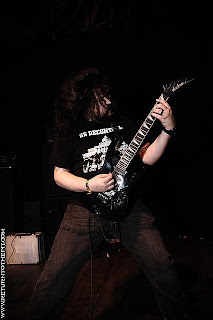 Anyways, I got one day of sleep and then straight back to work. Remastered Pigeon Religion's disc to be two different 7's, and worked more with Drone Throne Wednesday. Thursday was more of Six Million Dead's vocals, and Friday more Impregnating. This weekend, Conflict Resolution is starting a 7". We've done drums, bass, and vocals and are about to start guitar in a few. Pretty straight forward punk rock recording in the vein of DRI etc. and even two Suicidal Covers! I've worked with these guys a bunch of times and it's always a blast. Rich is running a pretty cool bass setup right now. 4x10 cabinet with a horn, and inspired by my pods in the studio, he bought one of his own a few years ago and runs it straight into his Hartke head. So, we're micing with an e609 off axis, and i5 on the cone and a direct signal from his pod on the socal metal setting. Pretty sweet! Tomorrow, wrapping up some drone throne and redoing some vocals for the Summary LP I did last summer.
Posted by Arcane Digital Recording at 11:46 AM No comments: 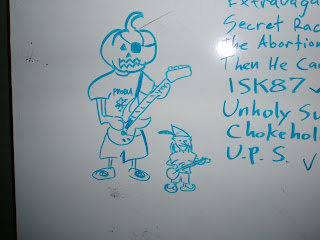 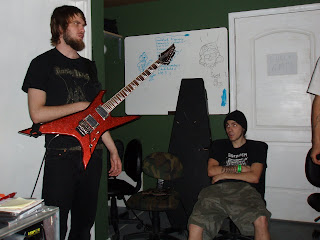 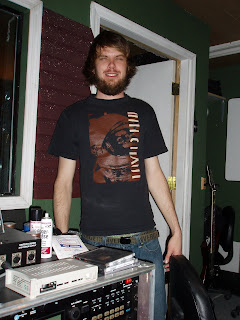 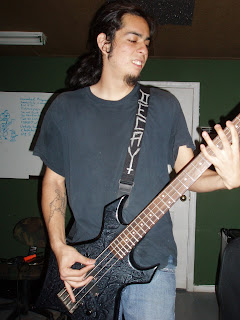 ...........eek, tough week again. Among some huge things in my personal life getting in the way of a few things, the work just keeps piling on! I can 't complain too much, because a lot of people aren't working right now and I never know when it might slow down. And of course, the recone kit I ordered for my Tannoy Ellipse's only came with one speakers recone materials and you have to do both at once or the tones will vary. My rep at Sweetwater knew that, but neglected to tell me the kit was only for one speaker. There's another $150 gone and I haven't even had the work done. And another of course moment is that I can't even hear the rattle in the speaker anymore. I'm sure it's on it's way out, though. So, I'll have the recone kit on hand for when it's time. Maybe things will be a little less busy. Been trying to get my new Mac Pro and Digidesign toolkit up and running. Arcane Digital will be 128 tracks capable by weeks end!
On to the projects! Impregnator's been doing their debut LP, the Second Trimester, with me over the last few weeks. It's definitely been a blast! It's Landmine Marathon's second guitarist, Dylan's band with a few friends. Funny lyrics about pregnancy, skateboarding, and weed. They're pretty into it. Lot's of blasting drums, Maury Povich samples, an HM2 pedal for that Nasum effect, and hilarious lyrics. This week I also redid the vocals for Sunyata's demo (the dry erase picture is an excellent depiction of their guitar duo), recorded another three Toad songs, and got one guitarist and bass done on Six Million Dead's LP. Tomorrow more Drone Throne songs, Monday through Wednesday a punk band called Contact Yourself, Tuesday night an acoustic performance by Luke NSK, Thursday a Toad mix, and Friday through Sunday starting emo band Tomorrow The Stars LP. Last Three pics are of Impregnator raping the land.
Posted by Arcane Digital Recording at 12:24 PM No comments:

.......to say the least, it's been one of the roughest weeks, if not months I've had in awhile. The studio is booked literally every day, I've got bands needing me to sneak work in as well on top of sessions I already have. I'm trying to do a systems upgrade with a new computer and plug ins, had to get a loan to do that, and the band is unbelievably busy. To top that all off, I had a pro tools system melt down sunday during the band Six Million Dead's guitar sessions and had to actually cancel and reschedule the session on one of my two days off til our tour due to Pro Tools not working properly. First session I've ever fully canceled from my end. I went out and grabbed my new Mac, and of course, the problem somehow fixed itself.
So, everything seemed hunky dory until I went to master a record Monday night for Buddha's Magic 8 Ball and the system was not recognizing my mastering hardware. Great. So, in trying to figure that out over the last few days, my computer has also stopped letting me back things up to external hard drives. Awesome. Thankfully, I have a seperate internal hard drive just for storage and backup.
Turns out my firewire port on the rear of the G5 isn't reading, and of course I only have two ports and the other runs my pro tools interface. So, I ran around frantically last night trying to get a hub and the only place that had em was Fry's. I bought the PCI one as the actual hub was $40 and this was $15! And, of course, it didn't work. So, now I've gotta run back to Fry's and try the $40 one before practice tonight so I can Master XWalrusX's album that I was up til 2 am mixing last night after practice tonight and then start the Impregnator album in the morning. Then I need to master about 3 records that I haven't been able to. Fun times. I'm currently recording a song for Roseau, yesterday was xWalrusx 's LP, Tuesday was a band from the Hopi Indian Reservation near the Grand Canyon called When The Legend Dies as well as a practice, and in the last few weeks I've lso worked on Feed Walrus Defeat from El Paso, Texas' EP and the Funeral Pyre from LA's remix for their album Wounds. I finally am gonna take a full day off Sunday and am looking so forward to it even though I have rehearsal that night. Then I don't have a day off til our tour April 8th and am REALLY looking forward to getting in the van and just driving. Really takes my mind off of things. On top of all this, my Tannoy Monitor's need to be reconed and it's gonna be a huge job. It never ends! haha. At least I'm working! As crazy as times like this are, it's so much better than the weeks I go sometimes without work.
Posted by Arcane Digital Recording at 12:15 PM 2 comments: 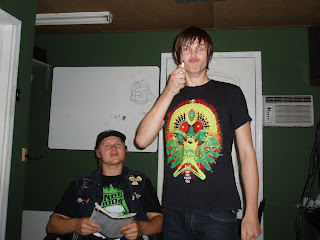 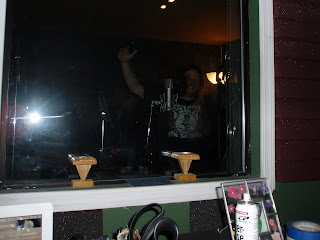 Another band I've been working with is Drone Throne which features Garrett from the Prosthetics and Alex from Slut Sister. Pretty Cool stoner rock 3 piece that reminds me of Floor mixed with Sleep or something along those lines. Good times. We had a problem during drum tracking where after completing the second song, Alex put his kick beater straight though the head. So, we moved ahead with the two songs completed and they're coming in for a few more in a few weeks. We used Garret's Carvin head for two sets of tracks for guitar and then we did two sets with a JCM 800 with a tube screamer fuzzed out on it. Royer R122, Audix I5, and a 57 on a Marshall cab with vintage 30's all gave it that warm feel. It's coming out pretty good and Stoney!
Posted by Arcane Digital Recording at 1:35 PM No comments: 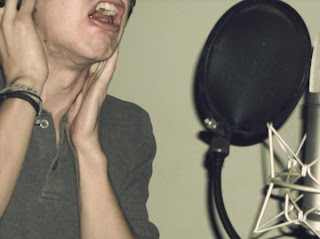 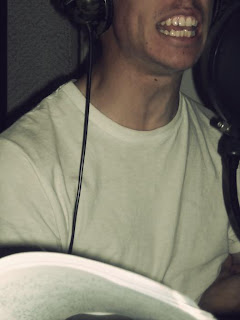 Finished up the Pigeon Religion recording and boy is it noisy. haha. And Jes' snare had about a 6" hole in it after the last song. Fun times. They laid down five or six tracks and despite what all the trash talkers say, I thought it was pretty cool! Reminded me of a lot of mid 80's No Wave stuff mixed with the Cramps etc. etc. Garrett got to use his old JCM 800 again and I think it was the perfect amp for their record. These are the only known photo's of them.
Posted by Arcane Digital Recording at 2:52 PM No comments: 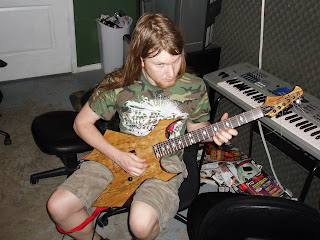 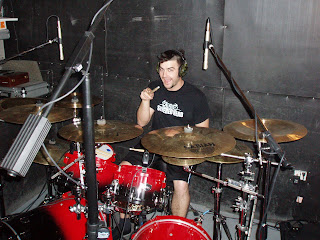 .....the last week has been chaos. Finished up the Royal Monsters finishing touches last Wednesday and then did a session with local stoner rock band Drone Throne afterwards til about 1 AM. Then, Misery Index from Baltimore, MD showed up about 7:30 AM the following morning and wanted to lay down a track that they had riffs for. We got through the drums and gave the guitars a shot, but ran out of time before we had to go to their show which my band was also playing as well. Adam Jarvis is hands down one of the craziest drummers I've ever worked with. I did a 7" for them a few years back with they wrote in the studio a few years back and was also one of those chaos as fast as we can do it recordings. Mark is going to send me some clean tracks of guitar, bass, and vocals so I can reamp everything as we didn't have time to lay em down and hopefully they'll have a good comp song or a split with someone. Check out Adam at www.myspace.com/miseryindex
We then played a show in Tucson the next night and LA the following night. Got back last night and am currently recording local No Wavers Pigeon Religion. Here's some pics of Adam and Mark of Misery Index. I'll get more in depth about some tech stuff as soon as I get this blog rolling more.
Posted by Arcane Digital Recording at 3:49 PM No comments: 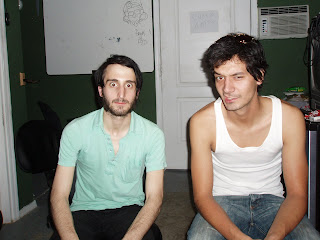 ...........I've decided to start a Blog to highlight certain projects I'm doing here in the studio for fun and to keep people informed about what's going on at Arcane Digital. We'll start with Toad! I've been working with the band Toad over the last few weeks which is a side project of the band Slut Sister. They recorded two tracks and a Ramones cover for their split with Drone Throne (who is recording here as well and is also a Slut Sister/Prosthetics side project. It's pretty interesting stuff in the vein of Samhain, but much heavier. Here's a picture of Andy and Trey from Toad during our mixing session looking goofy. Tonight, I'll be wrapping up recording with Ready Resist, which is a side project of locals Antietam. Also doing some mix polishing with locals Royal Monsters this week, wrapping up a mix for Feed Walrus Deafeat from El Paso, TX, and recording Misery Index from Baltimore on Thursday!
Posted by Arcane Digital Recording at 1:55 PM No comments: